The establishment works that have been started at the end of the 19th century have been completed in 1913 and the museum has been opened for visit in the soup kitchen building located in Süleymaniye Mosque complex, which is one of the most important works of Mimar Sinan, with the name of “Evkaf – ı İslamiyet Müzesi” (Islamic Foundations Museum). After the announcement of the republic, it has taken the name “Turkish and Islamic Works Museum”.

The museum has been moved to İbrahim Pasha Palace from the soup kitchen building in 1983. Ibrahim Pasha Palace, which is one of the most important samples of the 16th century Ottoman civil architecture samples is on the stages of the historical hippodrome, the history of which goes back to the Roman Period. This building, the precise construction reason and date are not known, has been presented to İbrahim Pasha by Kanuni Sultan Süleyman in 1520, who would be his grand vizier for 13 years.

İbrahim Pasha Palace, which is claimed to be bigger and more magnificent than Topkapı Palace by the history has been the stage of many weddings, feasts and celebrations as well as rebellions and turmoil and called with the name of İbrahim Pasha after the death of this person in 1536. It has been used by other grand viziers, and had functions such as barracks, embassy palace, register office, Janissary band house, sewing workshop and prison.

The palace located around four big internal courtyards has been made of stone in contrast with many Ottoman civil buildings, most of which are wooden, therefore it could reach today and has been repaired between the years 1966 – 1983 and has been born again as the new building of Turkish and Islamic Works Museum. The section, which is used as a museum today, is the big ceremony hall of the palace and the 2nd courtyard surrounding it, which have been the subject of all Ottoman miniatures of the palace and the gravures and tables of Western artists.

Turkish and Islamic Works Museum has been awarded with the Special Jury Award of Museum of the Year Competition of the European Council in 1984 and with the prize given by European Council – Unesco for its studies for making the children love the culture inheritance.

The elevated structure on the arches surrounds the terrace on the three sides. One of the most pleasant places in the museum is this terrace, overlooking the Sultanahmet (Blue Mosque) Square.

After 1983, Turkish and Islamic Arts Museum was closed to visitors for restoration in 2012, and after extensive work, it was opened again in 2014, on the 100th anniversary of its first opening, with a new understanding of exhibition and new places of visit.

The works of the museum’s rare examples of Emevi, Abbasi, Artuklu, Eyyubi, Ilhanlı, Timurid, Safavi, Kaçar, Memluk, Seljuk and Ottoman periods were collected from different areas of the Islamic world.

Turkish and Islamic Works Museum, that is among the important museums of the world in its class has works from almost all periods and all types of Islamic art with its collection exceeding forty thousand works.

The carpet section forming the richest collection of carpet art in the world had a separate importance and caused the museum’s being famous as a “Carpet Museum” for long years. The museum has the richest carpet collection of not only Turkey, but also the world. Besides rare Seljuk carpets, prayer rugs and animal figured carpets belonging to the 15th centuries and the carpets produced in Anatolia between the 15th – 17th centuries and called as “Holbein Carpet” in the West inspired by the geometrically figures or kufi writing are the most valuable parts of this section.

Turkish and Islamic Works Museum carpet collection that became richer with Iranian and Caucasian carpets and famous Uşak and palace carpet samples is a reference, which the ones carrying out a serious research on the carpet art in the world must apply to. 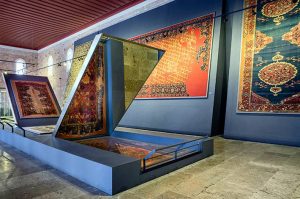 Koran – ı Kerims constituting a big part of the writing collection of Turkish and Islamic Works Museum from the 7th century to the 20th century come from a large geographical region where Islam has spread over.

Among the hand writings, except Korans, there are books (some of them with pictures) written about various subjects and these draw attention both in terms of their writing styles and their coatings.

Imperial edicts, warrants bearing the signatures of Ottoman sultans, the sultan’s signatures each of which is a work of art, Turkish and Iranian miniature writings make Turkish and Islamic Works Museum one of the most important museums of the world.

The most important parts of this collection are the samples of Anatolian Wood art of the 9th – 10th century. Besides the unique parts that remained from the Anatolian Seljuks and principalities, mother – of – pearl, ivory, tortoiseshell ornamented wooden works of the Ottoman Period, unique samples of inlaying art, Koran part cases, bookrests, drawers are the interesting parts of this rich collection.

Stone works belonging to Emevi, Abbasi, Memluk, Seljuk, Ottoman periods, some of which have motifs and some of which have figures, but all of which have writings have been gathered in Turkish and Islamic Works Museum. Unique and elite samples of stone art of Seljuk Period, grave stones on which hunting scenes, fairy creatures such as sphinx, griphon, dragon, early – period stone works with kufi writings, inscriptions written in different methods that are projections of Ottoman calligraphy art are important both in quality and in quantity.

Section of Ceramic and Glass

In this collection consisting mostly of the ceramic works found in the excavations made between 1908 – 14, the ones from Samarra, Rakka, Tel Halep, Keşan are in the first ranks.

It is possible to see the stages of Early – Islamic Period ceramic art in the collection of Turkish and Islamic Works Museum. The mosaic, mihrab and wall encaustic tile samples belonging to the Anatolian Principalities and Seljuk Periods and the plaster ornaments of Konya Kılıçaslan Palace constitute another important part of the collection. Ottoman encaustic tile and ceramic art samples end with near – period Kütahya and Çanakkale ceramics.

Turkish and Islamic Works Museum Metal Art Collection starting with the unique samples belonging to the Great Seljuk Empire period and mortar, censer, long – spouted ewer, mirror and dirhems constitute an important collection with the door knockers of Cizre Ulu Mosque and the 14th century candelabrums ornamented with constellation and planet symbols, which have an important place in Islamic metal art.

Ethnographic parts collected for long years have found the possibility of being exhibited with the transfer of Turkish and Islamic Works Museum to İbrahim Pasha Palace.

What shouldn’t be missed at the Museum of Turkish and Islamic Arts?

Make sure to see one of the hand-woven Uşak Anatolian carpets, located in the carpet section of the museum – one of the finest carpet collections in the world.

The exhibits from the Selçuk era demonstrate a high level of skill, and include wall tiles and woodcarvings which seem to have influenced Ottoman style.

There’s a fascinating collection of Yörük (Turkish nomad) folk art that includes tents used by the nomads – located on the basement floor.

There is a magnificent door rescued from the Great Mosque in Cizre (in the south-east Turkey), which dates back to 1155.

How can I get to the Turkish and Islamic Arts Museum?

The museum is located close to other important Istanbul sights, such as the Blue Mosque, Hagia Sophia, Arasta Bazaar, and Basilica Cistern. The closest tram station is Sultanahmet.

WHILE YOU ARE HERE

Explore the Blue Mosque and its surroundings. The park in the Square is especially colorful when tulips bloom. The racetrack which constitutes the most important part of the square witnessing many historical events, is a monument that cannot be overlooked. The must-see artworks in the Racetrack, where horse carriage races were held in Byzantine times, are Kaiser Wilhelm (German) Fountain, Theodosius Obelisk and Spiral Column. But after all, the place not to be missed in Sultanahmet Square is the Blue Mosque which gives its name to the square.

Text, pictures and news on the site can not be used without permission and without showing the source.
Social Networks
All right reserved